I separated the iconic Bach Chaconne into 49 violin segments based on the natural breaks or character distinctions that occur within the music. I used all of the original music.

These violin segments were numbered, then recombined randomly onto a single track, with little or no separation of silence between them. True random numbers were used, generated by noisy conditions in the Earth’s atmosphere. The segments range in duration from several seconds to half a minute.

After reconfiguring the Chaconne, I digitally modified many of the segments and added various tracks of original electronic music.

The recorded violin samples were selected from the complete set of Sonatas and Partitas for Solo Violin by J. S. Bach, recorded by Henryk Szeryng in 1968.

Solo Violin Music from Einstein on the Beach

Einstein on the Beach (1976) is the first, longest, and most famous of Phillip Glass’s operas, yet it is in almost every way unrepresentative of them. Einstein was, by design, a glorious “one-shot” — a work that invented its context, form and language, and then explored them so exhaustively that further development would have been redundant. But, by its own radical example, Einstein prepared the way — it gave permission — for much of what has happened in music theater since its premiere.

Einstein broke all the rules of opera. It was in four interconnected acts and five hours long, with no intermissions (the audience was invited to wander in and out at liberty during performances). The acts were intersticed by what Glass and Wilson called “knee plays” — brief interludes that also provided time for scenery changes. The text consisted of numbers, solfege syllables and some cryptic poems by Christopher Knowles, a young, neurologically-impaired man with whom Wilson had worked as an instructor of disturbed children for the New York public schools. To this were added short texts by choreographer Lucinda Childs and Samuel M. Johnson, an actor who played the Judge in the “Trial” scenes and the bus driver in the finale. There were references to the trial of Patricia Hearst (which was underway during the creation of the opera); to the mid-’70s radio lineup on New York’s WABC; to the popular song “Mr. Bojangles”; to the Beatles and to teen idol David Cassidy. Einstein sometimes seemed a study in sensory overload, meaning everything and nothing. – http://www.phillipglass.com

Chaconne from Partita No. 2 in d minor BWV 1004 for Solo Violin

‘Listening to the chaconne is as rich and layered an experience as the story behind the music. Whatever meaning you ascribe to the chaconne — personal, civic, divine, or none at all — it’s certain to leave its mark.

Johann Sebastian Bach’s chaconne has been arranged for nearly every instrument: from the ominous-sounding organ to the solo flute or the delightfully sparse marimba. Or, listen to these renditions by an enterprising clarinetist and an equally ambitious saxophonist. Or how about this menacing arrangement for trumpet and orchestra and this lyrical performance by two cellos. There is truly an arrangement for everyone.

But it’s something spectacular when a great violinist performs the chaconne.

Tim Fain’s live performance during Krista’s conversation with Bernard Chazelle at WXQR’s Bachstock is no exception. Before a full house at The Greene Space, he played Bach’s chaconne, the fifth and final movement from Partita No. 2. As our executive editor Trent Gilliss observed, “It’s a rarity and a privilege to be able to listen to a 15-minute violin solo without an orchestra.” Especially a great performance like Tim Fain’s, who is known for his electrifying recordings in Black Swan and 12 Years a Slave.

Bach composed the chaconne sometime between 1718 and 1720. Historians speculate that Bach composed it after returning from a trip and found his wife (and the mother of seven of his children) Maria Barbara had died. Fellow composer Johannes Brahms, in a letter to Clara Schumann described the piece like this:

“On one stave, for a small instrument, the man writes a whole world of the deepest thoughts and most powerful feelings. If I imagined that I could have created, even conceived the piece, I am quite certain that the excess of excitement and earth-shattering experience would have driven me out of my mind. If one doesn’t have the greatest violinist around, then it is well the most beautiful pleasure to simply listen to its sound in one’s mind.”

But while Brahms was a composer of the Romance era of music (for whom personal emotions were paramount), Bach did not inhabit the same world. In an essay for the LA Review of Books, Michael Markham writes:

“There is no evidence that Bach himself considered the chaconne to encode an entire vista of the universe or to sound out his own emotional depths. Such Romantic notions would never have occurred to a court composer who had trained in the late 1600s as a Lutheran town organist. Creating art then and there was not an act of personal expression but one of civic or religious service. Of course emotions could be depicted and messages delivered. But musicians of Bach’s generation did not need to feel an emotion in order to depict it. It was the next generation, beginning with Bach’s own son Carl Philipp Emanuel, who began to demand that a musician express emotions in a way we would call ‘authentic’.”

In “Discovering the Cosmology of Bach, Bernard Chazelle further suggests that beyond civic and professional duty Bach composed for the glory of God alone. For him, Bach’s chaconne is not powerful because he himself is grieving; rather, it conveys a more universal, complicated, and essentially human grief:

“As opposed to other composers, Bach targets the very young, the child, and people of a certain age, like me. And tries to leave out the middle. What I mean by this is that there are all kinds of mental, psychological dispositions from the opera that he totally shunned. Envy. Greed. Lust. Jealousy. I mean, this is the bread and butter of the opera. He never went there. He had no interest in that. His music tries to express things like, awe. Grace. Thanks. Fear. Trepidation. Hope. All kinds of sentiments a child can have, and an older person can have, but none of this sexual nonsense in the middle. And, so, in that sense, he thinks of death very differently from his own experience. He lost his parents before he was 10. He lost both of his parents, and then he lost half of his children. He lost 10 children. And, so, these are different, different times, different circumstances, and for us, it can be very surprising to see these reactions.

You can tell from his music that his emotion is raw. It is so controlled, but it is so profound. This is a man who truly grieves. I mean, you’ll hear the chaconne. It’s a dance. But it’s a grieving dance. I know, it seems like a paradox. But it’s extremely moving and — of somebody who clearly has enormous feeling. And, yet, it’s very controlled.’

The Story Behind Bach’s Monumental Chaconne – by Maria Helgeson 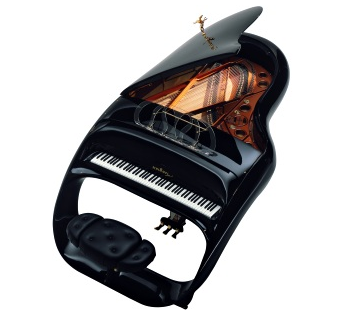